I’ve decided that to give you, the reader, more material I’m going to be doing shorter segments that cover such subjects as graduate schools, young artist programs and Fach changes. The original intention of this blog is to be an educational resource and I only see this as a viable extension of that. Today tenor Matthew Arnold is going to talk to us a bit about his switch from baritone to tenor. 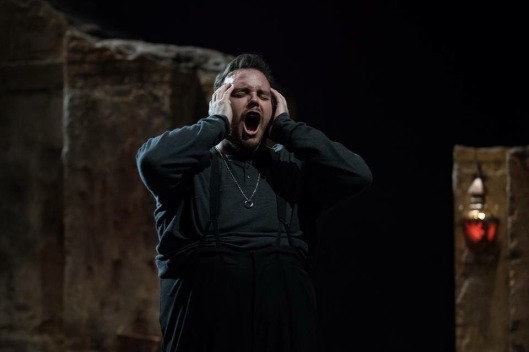 People for most of my singing career have been very split on what I was. In undergrad at the University of Delaware, many people thought that I was a tenor, but others including my voice teacher thought that I was a baritone that hadn’t developed a bottom yet…which was definitely understandable considering I was about 21 or 22 at the time. Once, I got to UNC Greensboro and started work on my Masters degree, the switch seemed more and more inevitable as my bottom still had not filled out and my top had gotten stronger. My teacher at the time, Clara O’Brien felt that I was some type of heavier tenor voice type. However, we decided to continue down the baritone path for the remainder of my time there and I am very glad that I did. Large tenor voices really should not start that switch until their mid to late twenties, which is right around the time that I started doing it. Also, continuing my study as a baritone helped to anchor the bottom of my voice which has a naturally baritonal quality. Lauritz Melchior always said that the best Heldentenors started out as Baritones and never lost touch with that “baritonal” grounding and I agree with him 100 percent. When I finally made the switch with my current teacher, Marilyn Taylor it was the absolute right choice for me. I was having trouble with my speaking voice after I would sing, but when I started vocalizing in my tenor range, my speaking voice improved tremendously. Once we really dug into the tenor rep and exercises, it was like my voice suddenly lined up and made sense. Now, that isn’t to say that this switch has not had its trials and tribulations…there have been many times when I was very frustrated that my voice wasn’t getting something or doing what I wanted it to do, but that is also because I am incredibly impatient! The decision to switch from baritone to tenor is one that shouldn’t be made lightly, but I am incredibly glad that I did make the switch and found my voice in the process.
I do hope anyone on the fence about their voice might have found this helpful. There will be more artists that I interview on the subject and of course I hope to conduct a full interview with all of these artists in the future.